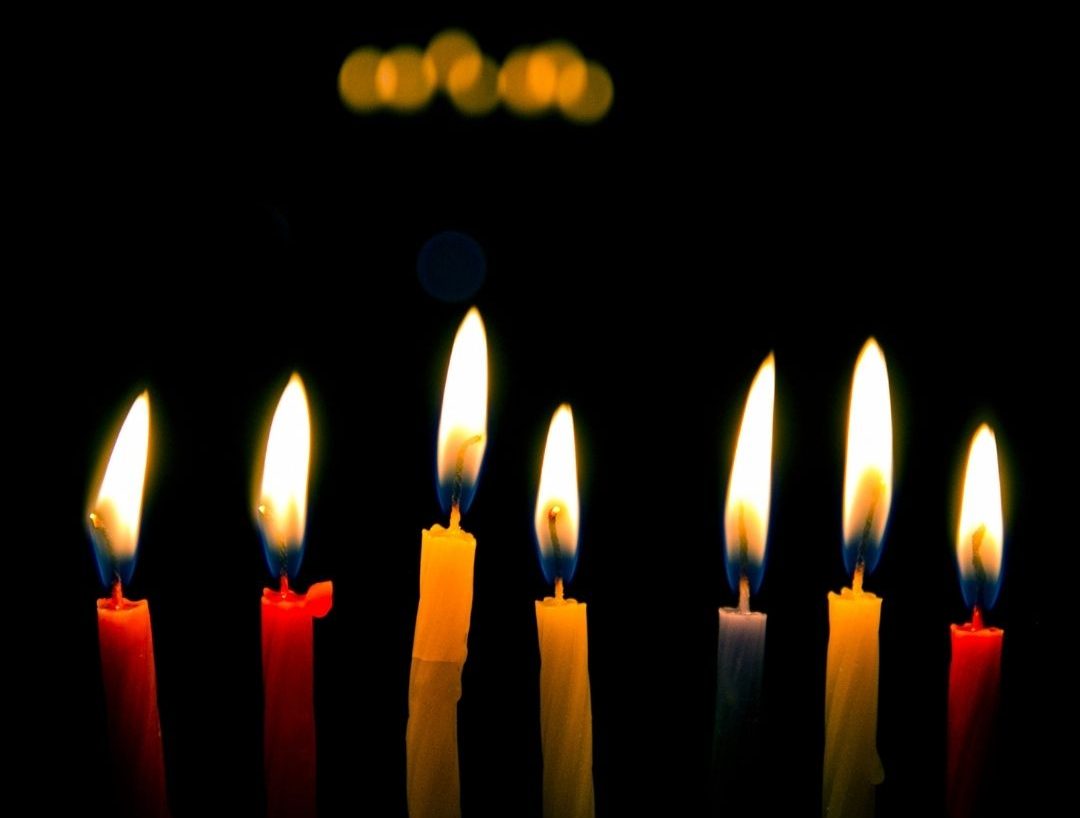 It was day seven of Chanukah. Liora and I had lit candles and sat on the tiny sofa that leaned against one side of the box we called a living room to watch them burn. The candles stood tall and colorful in a deliberately determined order of yellows, reds, blues, whites, and purples. Their long limbs reached towards the ceiling, heralding the military defeat of the Seleucids and the miracle of the oil.

We were discussing these factors as we sat, overlapping on a couch that was ambitiously described as a two-seater, although it barely had room for one. Liora, her warm body pressed against me, was contending once more that the only miracle we should celebrate was that a tiny amount of oil was able, miraculously, to sustain the lighting of the menorah on the temple mount for eight days.

However, I believed the more convincing miracle was the victory of the Maccabees, a feat so remarkable that it seemed to me – a fan of military history – more than simply an example of courage and strategic genius.

But I nodded as she informed me why I was wrong; my eyes wandering between her lips and her breasts – their untethered shape visible below her long-sleeved t-shirt.

“Eyes up,” she laughed, continuing her mission to demonstrate my wrongness.
“But you are so distracting,” I told her.

She had been equally distracting that afternoon when she had declared what she needed most to clear her mind – a mind in the throes of a research paper so esoteric my engineering brain failed to remember its topic – was to make latkes.

I loved my wife’s latkes. They were a fusion of recipes from her mother and mine. Her mother’s preposterous recipe that added elements like zucchini and carrot – and all manner of spices – was to be acknowledged but merged with my mother’s more traditional approach. Somehow, Liora combined the two and made something so much better than either.

I thought of her standing by the stove – the oil sizzling, our small kitchen filled with its slightly suffocating emanations – intent on frying perfect latkes. I had a document I had needed to finish for a 3 pm deadline, but it had been too much for me to miss watching my wife in action. She had worn the same loose, sheer t-shirt as tonight. And like now, she had been braless. Sunlight had streamed through the kitchen window. It had landed on her face and dusky blonde hair and ran through the meagre threads of her top to illuminate breasts that had been on my mind all day since.

“We should be looking at the candles,” Liora said, bringing me back to the moment. It was Chanukah, and my sexy wife was sitting so close to me that I could smell the scent of her thinking.

“There’s not enough room to sit side-by-side,” I replied, trying to turn my body towards the candles. The chanukiah sat on top of the old-fashioned writing bureau at which Liora worked; its roller door shut closed now.

This tiny room doubled as a living room and my wife’s workspace. We had a kitchen that squeezed in a small table and a bedroom with bed and a desk where I worked. At the end of the apartment was a closet that called itself a bathroom. It was all we had, but it was perfect.

The candles stood before the only window in our home which looked out onto the street. Ours was a ground-floor apartment, the one nearest the building’s entrance. We heard people as they came and went through the day – or night. During sunlight hours, we sometimes saw them gazing at the window, wondering what lay on the other side of the sheer curtains that separated our life from theirs. At night, heavier curtains closed us in.

Tonight, because we had the chanukiah with its burning candles placed before the window for the world to see – all curtains parted – we knew that our life was on display to passing audiences, familiar and unknown.

Liora pulled herself off the sofa and moved into the kitchen. “I’ll get the latkes,” she said. A thought occurred to me, so I followed that thought into the bathroom, pulling away towels huddled together on a rack. I lay them overlapping on the floor between the sofa and Liora’s desk.

“What’s this?” she asked, returning with a plate.

“I thought we’d be more comfortable on the floor.”

“You did?” She did not seem convinced.

“We don’t need the street watching us,” I said, picking off a latke and taking a seat on the towels. I bit into the potato mass, enjoying the layer of oil that spread across my lips. “So good,” I told her.

They were particularly oily, these latkes, but that was half the pleasure. Liora took a bite of the one she had selected, sliding down next to me. An oily residue swelled around her mouth. When I took my finger and spread it across her chin, she leaned forward to kiss me. I could taste potato, onion, garlic.

“The miracle of Chanukah will be that we don’t end up fat at the end of this chag,” I told her, taking more.

“The miracle was the oil,” she insisted with a smile, rubbing the golden juice into her hands. It left a fine layer that made her skin shine in the overhead light. I watched her breasts moving behind these oily hands and wondered about the color of her nipples.

“Hold on,” I said and sprang off the towels. I was back a minute later, a bottle of olive oil in my hands. Liora raised her eyebrows. “Lie down on the towels. I want you to watch the candles on your back,” I instructed.

She smiled at me, no doubt thinking she knew what was on my mind. My plans, however, were indeterminate, with no more detail than the involvement of Liora, oil, and nudity.

I lifted Liora’s top to reveal her belly button amid the rise of her Chanukah digestion. Removing the lid, I poured a short deposit on her skin, rubbing it around her stomach until a glistening layer spread across her torso. Outside, people were talking by the building entrance. The word ‘Chanukah’ floated into the room.

I pulled her track pants down and off. She wore her at-home panties. They were faded and stretched, not underwear designed to inspire, but their unsexiness aroused me.

Liora lay, her eyes on me, waiting. “Are you watching the candles?” I asked. We both turned our eyes towards them. Already shorter, their faint reflection danced on the glass, mixing with nighttime darkness and the imprint of streetlights.

I raised the bottle again, tilting it towards my open hand. It pooled in my palm before beginning to drip. I let the drops fall to my wife’s naked legs, creating a line of gold from her hips to her ankles. When my hands were empty, I massaged the golden sheen into her muscles.

I pulled off her t-shirt at last, lifting it gently over tussled hair. The nipples that had haunted me all day were finally revealed. They were orange – hard, pointed, and swollen. I bent down to kiss them before smothering them in oil.

A while later, when the front of her body shone smooth with oil, Liora declared her intention to roll over. She moved in a quick, smooth action, dropping her head to the towel, and making her back half available to me. Her ass, full and round, cried out to be covered in oil. I took the bottle and dripped liquid from her neck to her ankles.

My erection pushed against my pants. I stripped off quickly. Naked now, my hardness jutting out before me, I kneeled again beside my wife and massaged oil into her skin, feeling the tightness of her backside.

“The bottle is empty,” I told her when the last drops fell onto my hand.

“There wasn’t much left,” she said. “It’s a miracle you got this far.”

“Divine intervention,” I said, rubbing a slippery hand along my shaft.

Voices from outside journeyed in towards us.  As their conversation continued, Liora turned towards me, eyebrows raised, and whispered, “Can you see them?”

I shook my head.

“Do you think they can see us?” She asked, one hand on the towel, preparing to cover herself.

“No, not down here,” I reassured her.

Although their words were not clear, it seemed our neighbors were lingering, perhaps admiring the flickering of our diminishing candles.

I slid my hands below her hips and raised her butt towards me. Liora, her elbows resting on the towels, her head lowered, tilted her glorious ass towards me. I pushed my way inside her, holding slick hips with slimy hands.

As quiet returned outside, Liora’s utterances of pleasure began to form and grow – she was a woman who liked to make noise. “I think they’ve gone,” she said between moans.

My wife raised a hand to pleasure herself. When her sounds grew more frenzied, I knew she was close to coming. I hoped so because I was not sure how much longer I would last. Not long, it seemed. From deep inside my body a wave of pleasure grew, and I was lost. Shuddering, my seed blasted into my wife, a mighty orgasm gripping my body, muscles tensed and bulged.

Liora’s finger continued its mission towards climax. Her sobs signaled that she was almost there. They were sharper – staccato – until two final high notes and a long, raspy laugh indicated she had arrived. I pushed my now depleted erection into her until she was still and quiet, juices running down oily thighs.

When it was over, we lay together on the towels below the dying flames of the chanukiah, two sleepy, shiny bodies intertwined. Liora snuggled in my arms, her head resting on my chest. Hoping not to disturb her, I reached out my free hand in search of another latke. 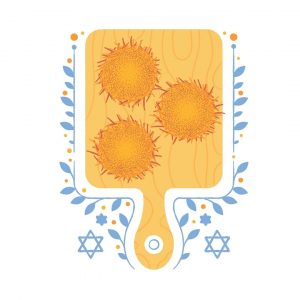